Pamela Anderson has joined a new social network called BitClout, which sources believe could be the star’s latest attempt to help free her pal Julian Assange.

Back in January, the “Baywatch” icon announced she was abandoning social media with a warning to Instagram, Facebook and Twitter users that big tech companies are trying to gain “control over your brain.” Anderson, 53, returned to Twitter briefly this week, however, to announce support for BitClout, hinting that her joining the network is a way toward “freedom.”

“Find me here and only here,” Anderson tweeted along with a definition of the term decentralization as “the transfer of control of an activity or organization to several local offices or authorities rather than one.”

Anderson’s subtle announcement has prompted questions from those close to the actress and activisit. One source tells Fox News that while her reasons for joining the network are “not entirely clear yet,” it “seems to have something to do with decentralization, freedom, a new world.”

“She intends on using the platform to speak freely and go against the grain,” the source continued, adding that it could be a plot to further her pleas to free the imprisoned WikiLeaks founder.

“We have to wonder if this has something to do with Assange. There’s really nothing she wouldn’t do to save his life,” said the source.

A second source close to Anderson tells Fox News her registration on the blockchain system is “to further her activism on a platform without the corporate checks and balances that suppress sensitive content.”

In January, Anderson bid goodbye to Instagram, Twitter and Facebook, confessing that she’s “never been interested in social media” and her decision comes from reaching a point in her life that she’s “genuinely inspired by.” She added that she’s been enjoying her time “reading and being in nature” with the declaration, “I am free.”

There is little known about BitClout although it’s been reported that users of Crypto Twitter are drawn to it. BitClout’s lead creator goes by the name of Diamondhands and recently discussed the platform’s intent in an interview with CoinDesk.

“The core insight behind BitClout is that if you can mix speculation and content together, you can not only get a 10x product that creates innovative ways for creators to monetize, but you also get a new business model that’s not ad-driven anymore,” the creator told the outlet.

END_OF_DOCUMENT_TOKEN_TO_BE_REPLACED 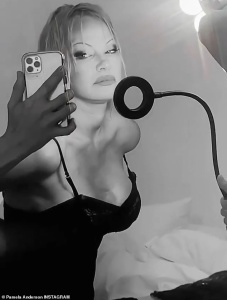 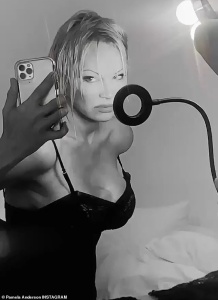 Pammy, 52, posted a sultry bedroom shot of herself in lingerie on Instagram Wednesday, plugging her new role as the creative director of Jasmin.com.

An offshoot of adult webcamming service LiveJasmin, this site sells itself as a place where users can communicate directly with influencers and discuss anything from travel and fashion to dating and relationships.

The Barb Wire star is expected to host regular virtual conversations with experts in the fields of relationships, intimacy, and sex positivity.

Speaking about her new gig to Good Morning America, she said: ‘I love the concept, I love the idea of trying to connect people.’

‘I feel like it’s one of those things where users and influencers can talk about anything and it’s direct communication looking into somebody’s eyes – I kind of take social media to another level.’

Pamela also got personal in the interview, saying: ‘I’m always in love and brokenhearted at the same time. My mother tells me so much it’s never going to change.’

In February this year, the actress split from movie producer husband Jon Peters after only 12 days of marriage.

The pair married on January 20th during a private ceremony, where Anderson’s sons Brandon, 23, and Dylan Lee, 22, who she shares with ex Tommy Lee, were in attendance.

Pamela Anderson is best known for her role as lifeguard C.J. Parker on “Baywatch,” but the actress is stepping into a new role as the creative director of a new social platform at Jasmin.com.

Jasmin describes itself as a new type of social network that allows users to communicate directly with different influencers and experts about topics ranging from travel and fashion to dating and relationships.

“I love the concept, I love the idea of trying to connect people,” Anderson told “Good Morning America.” “I feel like it’s one of those things where users and influencers can talk about anything and it’s direct communication looking into somebody’s eyes — I kind of take social media to another level.”

On Jasmin, Anderson reveals a different side of herself that no one has seen in the past: activist and advocate, hoping to be able to use the platform to talk about the things she is most passionate about, like love and romance.

“I’m always in love and brokenhearted at the same time,” said Anderson. “My mother tells me so much it’s never going to change.”

In the past, the actress has been an advocate for WikiLeaks founder and whistleblower Julian Assange, with whom she has a close relationship. In 2019, she told “The View” that Assange was “the world’s most innocent man.”

“I haven’t seen him in a long time,” Anderson told “GMA.” “I worry about him because I speak to his mother sometimes and yeah, he is in a dire position and I hope this turns out for him the way it should be.”

Just like the relationships Anderson has in her life — including her relationship with Assange — Anderson hopes that users on Jasmin will be able to create an emotional connection and friendships with others.

“Sometimes it’s easier to talk to a stranger than even your best friend about things that you’re concerned about,” she said. “I’m really excited because it’s breaking new ground. I think it’s going to be a ride.”