Lily James Says She Reached Out to Pamela 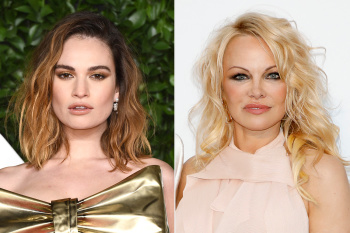 In a cover story for Net-a-Porter’s Porter that was published on Monday, James, 32, said she reached out to Anderson, 54, ahead of shooting the series in hopes of having her involved in the project. However, James says she didn’t get a response.

“I was really hopeful that she would be involved. I wish it had been different,” James told the outlet. “My sole intention was to take care of the story and to play Pamela authentically.”

“I was very hopeful that we would be in touch right up until we started filming,” she added, noting that Pam & Tommy is a series she “cares a lot about.”

James said during the interview that she had a lot of prep work to pull off her starring role.

“I’ve never worked so hard,” said James. “I read the books [Anderson] has written, I read her poetry, I can parrot along to all her interviews.”

She added that her physical transformation into Anderson was also something she described as both “freeing and liberating.”

“Slowly, our incredible team found a balance where I resembled Pamela but also felt like I could act through it,” the Cinderella actress shared, noting that she would be in makeup for about four hours starting at 3 a.m., putting on a chest plate, wig, and tan.

“I’ve never done anything where I look very different from myself before. And I’d really like to continue in this vein, because I felt there was something very freeing and liberating in it,” she continued. “There was a bravery that came from that. A courage that came from… disappearing.”

The Downton Abbey star even joked to the outlet that she “hated” returning to her normal, everyday self after shooting, as if she were being ” stripped of all these superpowers.”

Pam & Tommy follows the love story of one of Hollywood’s most notorious couples — who tied the knot in a beach wedding just four days after meeting — as well as their infamous sex tape and the scandal that followed.

“Having lived through that time in our culture, it seemed like a good moment to reexamine what happened to Pam and Tommy in 1995 through a 2022 lens,” producer Sue Naegle explained to PEOPLE of why Anderson and Lee’s story remains relevant today.

Added Naegle: “There was so much happening with the birth of the internet and this tape really shaped celebrity culture and the invasive paparazzi we know today. The story has so many moving parts, it needed to be told in a series.”

—
by Jessica
—
Comments are off
Uncategorized

The real rockstar couple dominated the tabloids with their four-day whirlwind romance and February 1995 marriage. The internet exploded after the couple’s honeymoon sex tape was stolen and leaked to the public.

Rogen is without his trademark beard in the trailer playing Rand Gauthier, the disgruntled employee who stole and distributed the tape.

“I’m on that tape, same as you,” Stan’s Tommy Lee says in the trailer, as the superstar couple work frantically to stop the tape release. “No, not like me you’re not,” James’ Anderson replies.

Anderson and Lee divorced in 1998 following a tumultuous relationship.

Rocker Courtney Love, a friend of Anderson, has been a vocal critic of the Hulu series, calling it “vile” and “outrageous” in May after Stan and James were featured in first look photos.

Tommy Lee has given his seal of approval for upcoming miniseries Pam and Tommy, saying he’s “stoked”.

The Mötley Crüe drummer will be the main focus of a new Hulu miniseries, following the events surrounding his infamous sex tape with Pamela Anderson.

Sebastian Stan is playing Lee while Lily James has been cast as Pamela Anderson. Pam & Tommy will reveal what happened when the pair’s sex tape was stolen.

“I know Sebastian, he’s playing me. From what he’s told me, really beautiful story,” Lee said when asked for his thoughts on the show by Entertainment Tonight.

“I think a lot of people would think it’s one thing, but it’s really about privacy and how things got crazy then. There’s different laws now.”

Discussing his thoughts on the adaptation of this period of his life, Tommy Lee went on: “The story’s actually cool. What actually happened wasn’t, but [Stan] tells me it’s pretty wild. I feel like it was forever ago. But it’s a cool story and people need to know. It’s cool. I’m stoked.”

Of James’ elaborate transformation into Pamela Anderson, Moe said her hair and makeup took “anywhere from three to five hours every morning before we even started filming.”

Pam and Tommy began filming earlier this year – a release date is yet to be confirmed, stay tuned for updates as they come in.