KIM Kardashian has ditched real fur from her wardrobe.

The Keeping Up With the Kardashians star, who is regularly slammed on social media for wearing animal flesh, has finally decided to opt for faux replicates.

Taking to her Snapchat account on Friday night, the 37-year-old uploaded a video of her dressed as her “style icon” Cher as part of her high school reunion, Kim revealed she was done with animal fur.

She said: “Hey guys, these nails only mean I’m here in Vegas to see Cher. I have blue nails, this coat is faux fur. That’s my new thing, faux.”

Her decision to banish animal fur from her wardrobe comes just months after Pamela Anderson, who is a long-time vegan and animal rights activist, sent Kim a coral faux mink coat that she custom-designed with Russian manufacturer Only Me and an accompanying letter which begged her to drop fur from her life.

“In the spirit of the season, please accept this coral hip-length faux-mink coat, made especially for you by my partners at Only Me Eco Fur in Russia.

“As we all ponder New Year’s resolutions, won’t you consider making a meaningful one to stop wearing fur?

“You’d be setting a trendy, compassionate example… Kim, I know your young fans would admire you and your brand even more if you dropped fur.”

The former Baywatch star has also pleaded with their E! reality show’s producer Ryan Seacrest to give her a cameo role on the popular series as she’d love to grill the famous family on their fashion choices.

The 50-year-old actress uploaded a photograph of her and Kanye, 40, and accompanied it with the caption: “@kanyewestt_official @yeezyboosts I love the brand — #yeezy -I want it all 😉 I hope no fur? I know Kanye wears fur sometimes. I wish he didn’t.

“So I’m reaching out to Kanye and the whole Kardashian family. We all know each other. And I know the girls and Kris have always looked up to me and appreciate my integrity.

“My goal was never to be famous or to be rich. Just to make a difference in the world – for the voiceless. She recently talked about her relationship with Julian Assange, admitting they have grown ‘very close’ since meeting in 2014.

And Pamela Anderson proved her unusual bond with the WikiLeaks founder is going from strength to strength, as she visited him at the Ecuadorian Embassy in London’s Knightsbridge on Tuesday.

The Baywatch bombshell, 50, channeled retro glamour in an opulent pale blue fur coat layered over a silky shirt and a string of pearls for the relaxed outing.

The blonde beauty completed her scene-stealing look with a silky nude midi skirt with a racy front split.

Styling her golden tresses in simple, tousled waves, Anderson showed off her age-defying beauty with minimal make-up.
Her outing comes after she opened up about her much-speculated on relationship with Julian, 46.

‘I wouldn’t say it’s romantic, but we are very close,’ she said on daytime show Megyn Kelly Today.

She confirmed she was introduced to Assange through fashion designer Vivienne Westwood previously during a visit to the Embassy of Ecuador in London, where he resides.

‘How could I improve my foundation? What does he think? Could we brainstorm about something?,’ she thought at the time.

When Kelly inquired about the actress’ thoughts on the disturbing allegations, Anderson said, ‘If you read through the reports and the UN findings, there is no evidence of rape.’
Earlier this year, prosecutors in the country ended the investigation. Assange was not charged for the alleged crimes.

But it seems that won’t change the conditions of his daunting detainment – which Anderson described into grim detail.

‘He lives in a very tiny space. He never sees the sunlight. He can’t get outdoors. He doesn’t go near windows, really, unless he goes out on that balcony once every few years,’ she told Kelly.

‘I’m there for four hours at a time and I see him all the time. He’s happy to see me when I come (and) very sad when I leave.’
Although confined, she said he is ‘safe’ where he’s at.

‘If he were to leave the Embassy, he would be arrested,’ she added. ‘He’s a really important person to me.’

Anderson told the NBC reporter, during the first part of the interview that aired Thursday, that Harvey Weinstein accusers shouldn’t have made the choice to go to ‘a hotel room alone’ with the hot head Hollywood powerhouse.

‘It was common knowledge that certain producers or certain people in Hollywood or people to avoid, privately,’ Anderson said.
She further denied any form of ‘victim blaming’ while speaking with TMZ Friday when she said: ‘(I) will not get coerced into apology’.

She also made a point to say the disgraced director is a ‘sexist pig and bully.’

In what appeared to be a jibe at his victims, she said it was ‘no excuse’ to presume the meetings were safe just because they were set up by agents – a claim which has been made by actresses such as Gwyneth Paltrow, who detailed run-ins with Weinstein. 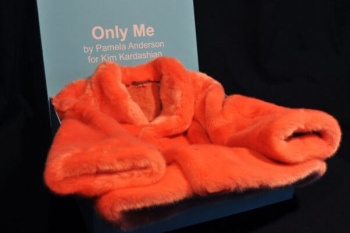