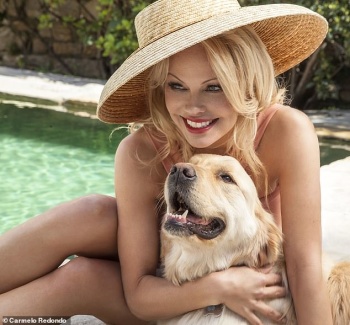 Pamela Anderson is ‘happier than ever’ and is back looking for love after moving on from her ‘abusive’ French soccer player ex Adil Rami, a source close to the actress has told DailyMailTV.

Anderson, 52, announced her split from the 33-year-old Marseille defender last month after accusing him of cheating and being a ‘lying monster’ who led a ‘double life’ with another woman.

She also claimed he was violent towards her, even ‘crushing’ Anderson’s hands while trying to control her – claims he has denied.

But now after a tough few weeks the four-time married former Baywatch beauty has bounced back and is looking for love once again.

Anderson is 10lbs thinner and considering romantic offers from suitors including dasily Russian-British media mogul Evgeny Lebedev, according to a close confidant.

‘Pamela has moved on and is happier than ever now that she’s free of [Rami] and his family’s toxic and selfish behavior. They all just protect the hand that feeds them, and that’s his,’ the source told DailyMailTV.

‘It will be easy to forget him, because she never knew him. He’s just an empty body with a head full of lies. Adil lied to everyone – a liar is a liar.

‘Even his ex/the mother of his kids is backtracking her truth. She won’t give up her posh lifestyle. He supports all of them financially; pays for everything. Pamela doesn’t need his money.’

The couple’s apparently rosy relationship ended abruptly in June when Anderson posted on Instagram claiming Rami was unfaithful after discovering he had been spending time with his ex and mother of his two children, Sidonie Biémont.

The source said Anderson was the perfect target for Rami. ‘With Adil, Pamela was seduced into a sinister sex addict’s game.

‘To him, Pamela was a trophy, a conquest to show off.’

Now her friend has told DailyMailTV that the former Playboy cover girl is back on the dating scene and is ready for a new, healthier romance.

‘Pamela has lost 10lbs since the breakup, and she’s happy about that. I guess a broken heart is an easy way to lose weight. But her heart will heal,’ the friend said.

‘She has many suitors that are happy she’s free. For example, Evgeny Lebedev has been offering her a romantic retreat, but I know she’s being quiet.’

The source said Anderson is also ‘on a mission’ and is ‘focusing on her passion to help vulnerable people and animals.’

She has also been talking by letter with her close friend, controversial Wikileaks founder Julian Assange, who is in prison facing extradition from the UK on espionage charges after his site leaked classified documents.

Posting on Instagram after discovering the extent of Rami’s relationship with Biémont, Anderson wrote: ‘I’m devastated to find out in the last few days. That he was living a double life.

‘It’s hard to accept. The last (more than) 2. years of my life have been a big lie. I was scammed, led to believe … we were in big love?

‘He is the monster. How could I have helped so many people @ndvhofficial and not be wise enough or able to help myself.’

The French soccer player posted his own public response in French, denying leading a ‘double life’ but admitting that he ‘should have been more transparent with this ambiguous relationship’.

‘In no way do I lead a double life, I am simply attached to preserve a lasting relationship with my children and their mother Sidonie for whom I have a deep respect,’ Rami wrote.

‘A break is never easy. As often in these situations, strong emotion can take over.

‘Pamela is a whole person, whom I deeply respect, she has conviction and is sincere – my love for her has always been sincere. That’s what I want to remember.

‘I remain and will remain faithful to my values and beliefs which are mine and continue to be committed to @solidaritefemmes, , which is always so strong.’

The Solidarite Femmes charity has since cut ties with the football star, after Anderson went public with allegations of his abuse and controlling behavior.

After their split, Anderson posted a video of her hands being bandaged, claiming Rami had previously ‘crushed’ them to the point of ‘cracking’.

The Barb Wire actress said she kept quiet about the alleged abuse, waiting for six months and then telling her doctors she was suffering from arthritis in her hands.

‘When he crushed my hands especially my right one till they cracked. It took me 6 months to go to Dr,’ she wrote.

‘I told them it felt like arthritis (so this is what they put down) – (I couldn’t say he hurt me to the dr) though I did tell his sister and the concierge to Olympic De Marseille who took me what really happened [sic].

‘The sister just told me to be patient. That he was changing.’

Anderson claimed that while they were together Rami had grabbed her roughly and refused to let her leave her car.

The model said that after their split he threatened to break her legs, phoned her from ‘multiple numbers’ and emailed her every day begging her to return to France.

‘He would hurt me in ways you couldn’t see… Grabbing me roughly – intimidating, holding me with his physical strength… Not letting me leave. Taking keys from me in car not letting me move [sic],’ Anderson wrote on her website.

‘The lies were only a small part of his controlling tactics. I was not allowed to be anywhere men are. Of course impossible.

‘He was always angry – I had to video all around me – always, cars , hotel rooms, dinner tables, still nothing was ever enough. While he carried on. Now my feelings are confirmed. People that are extremely jealous are usually the ones being unfaithful.’

Anderson’s friend told DailyMailTV that her ex husband Rick Salomon has been her rock through turbulent relationship problems.

Salomon helped Anderson raise her two sons, Brandon, 22, and Dylan, 21, who she had with ex-husband Motley Crue drummer Tommy Lee.

‘Rick has always been there for her boys,’ the source said. ‘He gets a kick out of her and adores who she is. He’s always loved her and has been patiently standing by, knowing Pamela lives in a fantasy. Pamela knows she can always count on him.’

The friend confirmed that Anderson has been spending more time with her ex recently.

‘The reports that Rick took Pamela and her boys to Vegas for her birthday weekend are true.

‘They also went to the lake. They spoiled her – she’s surrounded by a lot of love, support and protection. No one is taking her safety lightly. Adil is known to show up anywhere, so she is well protected where she’s at.

‘Rick is consistent and reliable. He was and he is,’ the friend said. ‘Their friendship is really the best part of their relationship. Rick was brutally honest, always truthful to Pamela. He loves her and always will. He just never wanted to tame her.’

Rami has strongly denied all the allegations of abuse and controlling behavior.

He told the The Sun newspaper: ‘These accusations of violence are completely false and I can’t let them run.

‘I hallucinate because it is so bad, those who know me know who I am and what are my principles, they know that this is impossible and that I’m incapable of doing such things.

‘If she wanted to hurt me she chose very well. She knows that my commitment to the cause of violence against women is something very important for me.

‘I respect the people at Solidarité Femmes that I have met, and their fight, far too much. It is really disgusting.

‘It’s one thing to lie to keep a good relationship with her ex and her children but lying about violence in order to hurt me that’s going too far and it’s unjust.’

Pamela Anderson refuses to be held down. In an exclusive new interview with Us Weekly, the 50-year-old model opens up about the sexual abuse she suffered growing up.

“I was molested as a child by a bad female babysitter, who is no longer alive,” she says. “And my first experiences with men were not consensual.”

But Anderson never let the abuse stop her from persevering. She landed her big break with Playboy in 1989 and became the magazine’s Playmate of the Month the following February, an accomplishment that she says she’ll never forget.

“I was painfully shy as a child. As a young girl, Playboy empowered me. It really saved my life,” she tells Us. “I felt very trapped inside and needed to free myself. It was a breakthrough for me, and there I met artists and activists and gentleman. It has been a fun and wild life.”

The road to success wasn’t always easy though, which is why Anderson has a message for those who have gone through similar struggles. “I encourage everyone to be brave and step outside your comfort zone,” she says. “It’s a springboard into the unknown. And when you can do this, you can really live.”

She continues, “We’ve all had some kind of tragedy in our lives. We just have to remember that and be good to each other.”

The Baywatch alum is also speaking out against the recent sexual misconduct scandal in Hollywood. (She came under fire in November for suggesting that Harvey Weinstein’s accusers knew what they were “getting into” by “going into a hotel room alone” with the movie mogul, who has denied any allegations of non-consensual sex.)

“Hollywood is difficult. It is not my favorite place to be,” she tells Us. “But it is a business, and if this is the life you want, you play the game. I’m happy to be living in France now. Hollywood is too much. I’d rather use my energy in other ways.”

Those other ways include continuing her work as an activist with PETA and writing her upcoming book, Lust for Love: Rekindling Intimacy and Passion in Your Relationship. As she tells Us, “Activism is sexy.”