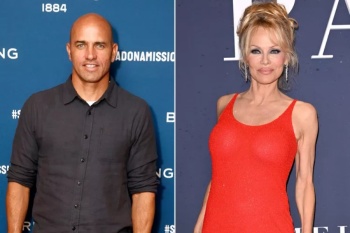 Kelly Slater is still a fan of his ex-girlfriend Pamela Anderson.

The 11-time World Surf League champion, 50, congratulated his former Baywatch costar and her family this week on the premiere of her Netflix documentary Pamela, a love story, in which Anderson, 55, looked back on her life, career and relationships, including one with Slater.

“Congrats to you guys. Look forward to watching. :)” Slater commented on a post by Anderson and Tommy Lee’s son Brandon Thomas Lee, who produced the intimate documentary.

In one candid confession from the film, Anderson admitted that she was still dating Slater during her 1995 whirlwind courtship with Lee, now 60, when they got hitched four days after meeting. The bride’s first call was to her new ex.

“I was dating Kelly Slater at the time, and I was supposed to go see him in Florida and meet his family,” she said, recounting the impromptu Cancún beach wedding. “My first phone call was to him to tell him I was married. He’s like, ‘What?!’ That was horrible.’ ”

Anderson had fond memories of her young romance with Slater, whom she met while starring together on Baywatch. “He was my big love, actually. He was such a sweetheart to me and so good to me,” she mused.

The former Playboy Playmate said that she “dated Kelly all the time,” and they “were together between lots of boyfriends and lots of girlfriends for him too, but it wasn’t just me.”

But Slater was a “free spirit,” Anderson said. “You couldn’t get your hands around him. But you don’t own anybody. Nobody owns anybody, and you just let them be who they are. Sometimes it’s better not with you.”

Anderson previously spoke to PEOPLE at the Los Angeles premiere of Pamela, A Love Story, explaining how personal the documentary and her Love, Pamela memoir were for her.

“Of course, it’s emotional for me,” Anderson says. “It’s just all these wonderful memories and hard memories too. But I wanted to go back into those feelings and feel those feelings.”

Pamela, a love story is now streaming on Netflix, and Love, Pamela is available wherever books are sold.

—
by Jessica
—
No comments
Article • News

“I’m sure it’s going to be annoying to his wife. I’d be annoyed,” the former Playboy Playmate, 55, admitted to WSJ. Magazine about “Love, Pamela,” which hit bookstores Tuesday alongside the outlet’s interview.

Anderson writes in her book that she knew very little about the Mötley Crüe drummer — including his last name and where he lived — when they eloped in Mexico in 1995.

Although they’d only known each other for a few days when they said “I do,” the “Baywatch” star remembers being “genuinely happy” and “lost in a sea of love.”

But according to Anderson, the honeymoon phase faded quickly. She goes on to describe a tumultuous marriage marked by anger, jealousy, physical abuse, an arrest, jail time, substance abuse, a suicide attempt, family feuds, lawsuits and a stolen sex tape.

The model-actress explains that her split from the musician was “the hardest, lowest, most difficult point of [her] life,” but she “had to protect [her] babies.”

Despite going on to have several more marriages, including one to Kid Rock, Anderson says her relationship with Lee “may have been the only time [she] was ever truly in love.”

As for the 60-year-old rocker, he married Furlan — a social media personality 24 years his junior — on Valentine’s Day 2019.

The former Vine star, 36, has neither publicly commented on Anderson’s memoir nor responded to Page Six’s inquiry.

The “Home Improvement” alum said in her WSJ. Magazine profile that Lee has not read her book.

—
by Jessica
—
No comments
News

Pamela Anderson’s kids say her infamous sex tape torpedoed her career and cost her a lot of money in the long run … which is why they’re hating on the streaming version of her life.

Brandon and Dylan Lee — the two adult boys Pam shares with Tommy Lee — spoke out in her new Netflix show, “Pamela: A Love Story” … calling the stolen and leaked video she’s made with her then-rocker hubby ended being a turning point in her life for the worse.

Brandon said, “She would’ve made millions of dollars if she just would have signed a piece of paper. Instead, she sat back with nothing and watched her career fizzle into thin air. She was in debt most of her life.”

Dylan, meanwhile, said his mom’s trajectory in Hollywood would’ve been much different if she had just sold out and cashed in on the tape.

Rather than get in the gutter, however, Dylan says his mom tried to protect her kids as much as she could … even if it ended up putting her in the red, which her sons say happened.

They also decried just how underpaid PA was at the height of her career, pre-sex tape, and how unfair they think it is that their mother continues to be exploited by Hollywood to this day. They didn’t name names — Lily James and Sebastian Stan, specifically — but it’s clear they’re not fans of the way their show was handled or how it portrayed their parents.

The boys ended their thoughts in a somewhat ominous tone, saying there’d be hell to pay “when we come knocking” over the way their mom was treated at the time.

—
by Jessica
—
No comments

Page 1 of 56 1 2 3 4 … 56 Next »
WELCOME to your #1 source for the world's most recognized blonde, Pamela Denise Anderson . PAO aims to bring you everything Pam, we have the web's largest Pamela Anderson Photo Gallery, the very latest news as it happens, the most active Pam forums, and so much more. Pamela Anderson Online is truly your number one source for the VIP Baywatch Beauty.