Pamela Anderson was sure to put her style stamp on her latest airport look as she documented her first flight in the wake of the coronavirus pandemic on Instagram.

The 53-year-old was sure to stay protected as she donned a PPE shield, protective face mask and blue non-latex gloves for her flight to LA on Thursday.

The blonde bombshell, who was catapulted to fame on US series Baywatch, didn’t sport all PPE for her travel and instead opted for a chic shirt-sleeved jumpsuit.

The TV star worked her platinum locks into a voluminous wavy-style and sported a dramatic beauty look.

Her post didn’t go unnoticed by her 1million followers but more importantly her son Brandon Lee, who commented: ‘This may be my favorite looks of all time’.

Earlier this month, Pamela looked sexier than ever as she celebrated both Canada Day and her 53rd birthday.

Anderson took to Instagram on with a leggy black-and-white shot in which she donned a black romper while laying on her belly on the bed in a luxurious bedroom.

The Baywatch alum wrote in the caption ‘Happy [Canada] day,’ using an emoji of the Canadian flag to represent the county.

The V.I.P. actress also recently made a plea to Canadian Prime Minister Justin Trudeau encouraging him to go vegan and praising him for his ‘recent decision to invest another $100 million in our mushrooming plant-based industries.’

‘Your fiscally responsible move not only creates good jobs for Canadians but also spares countless animals a terrible life and death,’ she said.

She said that As COVID-19 has exposed serious health risks associated with factory farms and slaughterhouses, the world needs more sensible leaders like you, who are willing to embrace clean, compassionate, and clever food solutions.’ 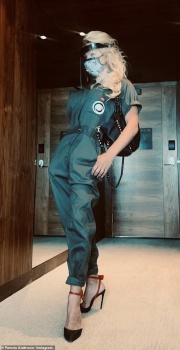 Nothing can prepare you for FaceTiming Pamela Anderson. One second there is only you — staring, through a layer of iPhone glass, at your tired, trapped reflection, both of you hoping that is not how you actually look — and the next second there is Pamela Anderson, brightening the screen instantaneously and completely, the way a ray of sun stretching beyond a cloud can seem to bounce off the whole Pacific.

She is striding across the great outdoors, and she is smiling and she is saying hello but singing it “Heh-LOOOW!” like she is delighted and excited to talk to you. As if you were not bothering her.

But it can’t have been Ms. Anderson’s — Pamela’s? Pam’s? “Anytime anyone calls me Pam, I feel like they’re mad at me. But anything is fine!” — dream of dreams to drop everything in the middle of her day to answer nosy questions for over an hour.

She has a six-acre pocket of a Canadian island to run. She has shrubs to select based on criteria of prickliness (for privacy) and beauty (for overall visual harmony). She has formal letters to write to the men and women — mostly men — who hold their nations’ nuclear codes, about subjects close to her heart. She has got Anaïs Nin to reread, and Russian to study, and a cam site to unveil.

The last of these tasks, on a recent Friday afternoon, granted the intrusion into Ms. Anderson’s peaceful, insular existence. She was preparing for the refurbished debut of Jasmin, a not necessarily sexually explicit webcam or “camming” site, which offers live online broadcasts and prerecorded content, and has been envisioned as a tamer offshoot of LiveJasmin, one of the most popular, nearly always sexually explicit cam sites on the web.

Jasmin had hired Ms. Anderson in 2019 as its spokeswoman and creative director, pledging in a subsequent news release that she would appear daily there, and to connect “users with lifestyle, relationship and sex positivity influencers.”

Briskly strolling the grounds of her Vancouver Island property, Ms. Anderson, an effervescent 52, cast an impression of a woman who doesn’t take herself too seriously, except in the way dreamy people tend to treat everything in the universe with equal seriousness.

She spoke a mile a minute (1.6 kilometers Canadian) about her rustic life, and the “misunderstood market” that is camming, her voice for the most part perky and girlish, except for occasional plummets into deadpan.

After describing a fairy-tale existence with various cute marine mammals forever frolicking on and around her small wooden dock, she added, with faux causticness, that the seals “look like big Rottweilers swimming around.” After declaring optimistically, “I think I have a lot to say that might be interesting to people,” she did an abrupt volte-face, switching to a low, confessional timbre: “Who knows? Who knows, right, what I’m doing? I don’t know. Maybe no one will be interested.”

The property belonged to her paternal grandmother, Marjorie, who used to run a small general store out of one of the buildings on site. Ms. Anderson bought it from her decades ago so that, she said, her grandmother could have the market value in cash to distribute to her children, and the land could stay in the family. It’s on the water, in the same small town in British Columbia where Ms. Anderson grew up; she moved back last July, after spending a couple of years in the South of France.

“There used to be nine cabins here,” Ms. Anderson said, pausing for breath between sentence bursts as she roamed. “My mom and dad probably conceived me here. They lived in Cabin 9. And they got married on the property.”

“See these little bedrooms?” she asked, showing off cozy A-frame accommodations. Ms. Anderson explained, in detail, where everyone in her father’s family used to sleep. “They’re so cute! Tiny.” One of the small white bedrooms is where she sleeps now.

“At my window, I have a woodpecker who’s burrowed a little nest. He wakes me up every morning, banging his head against the wall.” She switched to a singsong voice, singing her next words up the scale: “They’re! So! Loud!”

“What else is here?” she asked herself.

By her own admission, Ms. Anderson “kind of abandoned” the property for 20 years after her grandmother’s death. “It was really dilapidated,” she said. Some of the crews she had hired to fix it up called it “the haunted house.” Some people (including her parents, who live nearby) believe it is haunted.

“Oh, they have stories, like there’s dead bodies. And everyone has nicknames, the people that lived on here.”

(“Here’s Acid Eddie’s house,” she would say later, while crossing in front of a small cabin.)

“Someone buried gold on the property. I’m like, ‘Really?’” she scoffed.

Years ago Ms. Anderson and an investment partner filed documents to build a collection of condominiums and townhouses on the property, but the development plans fizzled. On the phone, Ms. Anderson said she has “no plans to make it a business. I just want to live here.”

“It’s for family. Or for, if I had a photo shoot here, I could put the whole crew here.”

In addition to the main house, Ms. Anderson envisions a greenhouse, a utility building, a couple of cabins and a vegetable garden whose bounty she will can. (“With my mother!”)

Her flower garden will be the colors of late dusk: blues, purples and pinks. “I don’t like oranges or reds so I’m staying away from that,” she said. She knows her plant names: bleeding hearts, trilliums, Hicks yew hedge. She knows the exact number of shocking pink Yves Piaget rose bushes she will require: 62, already ordered.

“When I ever had problems at any time in my life, I would come here and dream really vividly,” Ms. Anderson said. “When I go into the middle of my field, with all the trees surrounding me — it’s just like they’ve known me my whole life.”

The weather in British Columbia keeps her calm, she said, although “I don’t really dress for the cold.” In sunny Los Angeles, whose beaches Ms. Anderson found fame patrolling on the television series “Baywatch,” “I think I have more of a nervous kind of energy, or I’m hyper,” she said.
END_OF_DOCUMENT_TOKEN_TO_BE_REPLACED

Pamela Anderson‘s marriage to film producer Jon Peters is over just 12 days after their secret wedding.

A source close to the former couple tells PEOPLE Anderson “just needed to take a step back” in deciding to split.

“Although they have known each other for more than 30 years, they had never lived together,” says the source. “Living with someone, you truly get to know them. Pam’s a romantic, but she is also very independent.”

Adds the source, “This all moved a bit fast, so they both agreed to put it off.”

Anderson and Peters married on Jan. 20, with the Baywatch later announcing on Feb. 1 to The Hollywood Reporter that they had decided to split.

“I have been moved by the warm reception to Jon and my union,” the actress and activist, 52, said. “We would be very grateful for your support as we take some time apart to re-evaluate what we want from life and from one another. Life is a journey and love is a process. With that universal truth in mind, we have mutually decided to put off the formalization of our marriage certificate and put our faith in the process. Thank you for respecting our privacy.”

A source told THR that the couple had not yet filed the legal paperwork for a marriage certificate after their wedding.

A rep for Anderson did not immediately respond to PEOPLE’s request for comment.

News of the split came just eight days after Anderson posted her first photo of she and Peters, 74, as a married couple to her Instagram Stories. In the photos, Anderson was beaming in the black and white shot, smiling next to Peters, who wore shades.

A day after their nuptials, Anderson’s publicist told PEOPLE, “They are very much in love and were married yesterday.”

The two first met in the mid-’80s while at Hugh Hefner’s Playboy mansion and began dating after their encounter.

“Pamela has never seen her full potential as an artist. She has yet to shine in a real way. There is much more to her than meets the eye, or I wouldn’t love her so much,” Peters told THR after the nuptials. “”here are beautiful girls everywhere. I could have my pick, but — for 35 years — I’ve only wanted Pamela.”

Anderson was previously married to Tommy Lee, with whom she shares sons Brandon, 23, and Dylan, 22. The two were married from 1995 to 1998 and had a tumultuous marriage, in which Lee spent six months in the Los Angeles County Jail for spousal abuse.

He also had a 12-year romance with Streisand when he met her as a hairdresser before A Star Is Born, according to THR.

Page 7 of 45 « Previous 1 … 4 5 6 7 8 9 10 … 45 Next »
WELCOME to your #1 source for the world's most recognized blonde, Pamela Denise Anderson . PAO aims to bring you everything Pam, we have the web's largest Pamela Anderson Photo Gallery, the very latest news as it happens, the most active Pam forums, and so much more. Pamela Anderson Online is truly your number one source for the VIP Baywatch Beauty.