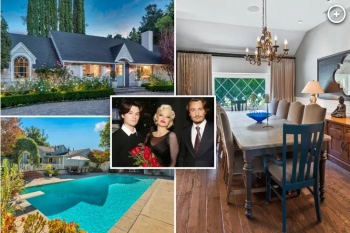 Brandon Thomas and Dylan Lee — Pamela Anderson and Tommy Lee’s sons — have just begun a new chapter in Southern California. Following the $3 million March sale of their five-bedroom home in Malibu, the two have just closed on a home in the Los Angeles area, which they spent $3.99 million to call their own, The Post has confirmed.

TMZ first reported news of the deal for the ranch-style retreat, located in Encino. The property encompasses a total of 4,170 square feet, according to its listing, and has four bedrooms and five bathrooms in sum.

The home comes remodeled and in turnkey condition — and it stands behind a wrought iron gate, surrounded by oak trees. The main house features high-pitched ceilings, a large gourmet kitchen with stainless steel appliances, an adjacent dining area and large windows that let in good natural light.

The main home alone measures some 3,700 square feet and has three bedrooms — as well as a living room with a fireplace and a yoga/art studio up in the finished attic.

There’s also a roughly 400-square-foot guesthouse, which has its own full bathroom.

Elsewhere, their new purchase also has a two-car garage — as well as a paver-stone driveway and a motor court — a yard and a large swimming pool.

Brandon, 25, is the eldest child shared between Anderson and Lee. Like his mother, he has acting credits, having appeared in “The Hills: New Beginnings” and “Sierra Burgess Is a Loser.” He’s also behind the cheekily named Swingers Club, a clothing line inspired by retro golf wear, which he launched in 2021.

Younger brother Dylan is 24 and is a musician and a model — having walked for labels including Dolce & Gabbana and Hugo Boss.

The Agency represented both sides of the deal. Cooper Mount repped the brothers, while Craig Knizek and Andrea Korchek represented the sellers.

Pamela Anderson Swaps Summer Flats for Balenciaga’s Controversial Crocs
WELCOME to your #1 source for the world's most recognized blonde, Pamela Denise Anderson . PAO aims to bring you everything Pam, we have the web's largest Pamela Anderson Photo Gallery, the very latest news as it happens, the most active Pam forums, and so much more. Pamela Anderson Online is truly your number one source for the VIP Baywatch Beauty.