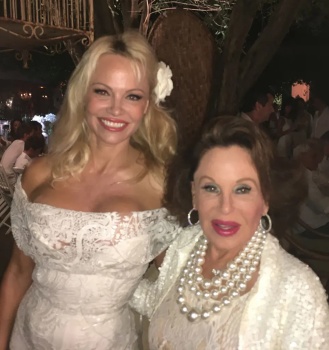 Pals of Pamela Anderson are still raving about her starring role as Roxie in “Chicago” one month after the “Baywatch” icon made her Broadway debut.

Rich Strike won the Derby earlier this month after overcoming incredible odds as an 80-1 long-shot.

And if anyone knows about stars on the Great White Way, it’s Haskell, who told us she’s seen every show on Broadway this season with the exception of “one or two.”

Of Anderson, Haskell added, “She just got divorced about ten minutes ago from some guy in Canada — not Tommy Lee, he was several husbands ago…. [Pamela is] fabulous! She’s a showstopper. I’m so proud of her.”

Anderson spent her day off on Wednesday having an early birthday dinner with Haskell, who turns 81 on May 17. It was a dinner for two at Polo Bar and, “It was just fabulous,” Haskell said.

“Everyone was coming up to [Pamela] asking her for her autograph — even some of my friends! They didn’t even look at me. Everyone was asking, ‘Is that Pamela Anderson?’ They couldn’t believe she was there,” Haskell said.

Polo Bar head honcho Nelly Moudime even popped over to the table to say hello to Anderson and to wish Haskell a happy birthday, we’re told.

Anderson’s eight-week run in “Chicago” is coming to an end, but Haskell told us her friend “may come back in the fall.”

“She’s getting offers like crazy now to do all sorts of things,” Haskell added. And, of course, “It’s fabulous!” she said.

Pamela Anderson moonlights as dog walker in NYC
WELCOME to your #1 source for the world's most recognized blonde, Pamela Denise Anderson . PAO aims to bring you everything Pam, we have the web's largest Pamela Anderson Photo Gallery, the very latest news as it happens, the most active Pam forums, and so much more. Pamela Anderson Online is truly your number one source for the VIP Baywatch Beauty.