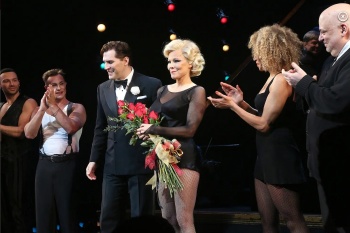 Can Pamela Anderson sing and dance?!

That’s been the question on everybody’s lips since we first learned the star would be joining the cast of “Chicago” on Broadway.

I can now attest that the actress and “Baywatch” babe moves confidently, carries a tune and, you know, all that jazz.

Anderson, 54, started her eight-week run as foxy Roxie Hart in the musical Tuesday night, and she was greeted with the kind of crowd euphoria that few shows have received during this tricky season — let alone a production that just turned 25 years old.

Her sons, Dylan Jagger Lee and Brandon Thomas Lee, were sitting in the Ambassador Theatre, decked out in their midweek finery, supporting their famous mom.

For Tuesday’s other, non-blood-related ticket-buyers, Pam might as well have been Ethel Merman considering the roars. She was swell, she was great.

It helps that Roxie — a 1920s adulteress who murders her lover and becomes a tabloid darling as she argues self-defense — is the perfect part for the entertainment icon.

Producers Fran and Barry Weissler — whose whole show is in terrific shape — have printed money for decades by cycling out an array of stars in the lead roles.

However, hardly any (save for Melanie Griffith, maybe) know first-hand what it’s like to be front-page news the way Anderson does.

When her Roxie is bombarded by reporters and flashbulbs at the courthouse with her smooth-talking lawyer Billy Flynn (Ryan Silverman), there’s a world-weary wisdom and a learned darkness to the actress that, intentional or not, separates her from the many Roxies who so often go overboard with squeals and emoting.

Anderson is also very funny. The excited audience occasionally stepped on her laughs with their applause, which is not the worst problem to have. That — and some other wrinkles — will smooth out in a few days.

Anderson sings her big solos — “Funny Honey,” “Roxie” and “Me and My Baby” — just fine. She won’t be headlining Carnegie Hall in September, OK, but she acts the songs with vulnerability and a hint of Marilyn Monroe flirting and hits all the notes.

But what any diehard fan of John Kander and Fred Ebb’s musical was waiting for Tuesday was the end of Act 2. There’s a brilliant dance called “Hot Honey Rag.” Original stars Chita Rivera and Gwen Verdon performed it on “The Mike Douglas Show,” and you’ve probably seen it in the Oscar-winning film with Catherine Zeta-Jones and Renée Zellweger.

With a new role on Broadway, a bio-series about her life and an upcoming Netflix documentary, Pamela Anderson is making a huge comeback.

The audience was holding our collective breath until Anderson tackled that sensual Bob Fosse mirror act with her brassy Velma, Lana Gordon. Could she do it? The number ends with a cartwheel! But when she got there, in front of a gold fringe curtain, she didn’t disappoint.

The lava lamp hips, the octopus arms, the precise footwork, the gymnastic finale — she landed it all. There was a standing ovation after the song, which a quarter century into its run, “Chicago” doesn’t see all that often.

Anderson isn’t channeling Sanford Meisner here, folks, and I’m sure some acting snobs will have their druthers. But there is something to be said about the electricity that comes from pure affection for an actress — especially if she is able to generously return it. And, boy, does she ever.

In “Chicago,” Billy Flynn has a vital lesson for newbie live performers: Just “give ‘em the old razzle dazzle.”

On “razzle dazzle,” Anderson could teach even Billy a thing or two.

Pamela Receives Support from Her Sons
WELCOME to your #1 source for the world's most recognized blonde, Pamela Denise Anderson . PAO aims to bring you everything Pam, we have the web's largest Pamela Anderson Photo Gallery, the very latest news as it happens, the most active Pam forums, and so much more. Pamela Anderson Online is truly your number one source for the VIP Baywatch Beauty.