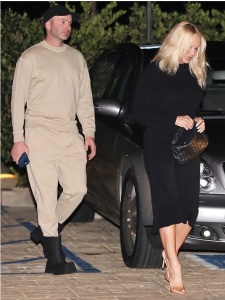 She was reported last month to be divorcing her bodyguard husband Dan Hayhurst after being married for just over a year.

But Pamela Anderson was soldiering on on Tuesday night, when she was seen dining out at the swanky Japanese restaurant Nobu Malibu with her son and her assistant Jonathan.

The 54-year-old Baywatch star put on an elegant display for the evening with a classic black dress.

Pamela’s look featured long sleeves and reached down to her knees, with a short slit in the back of her skirt that highlighted her fit legs.

She contrasted the dark outfit with a beige set of pointy open-toe heels that elevated her 5ft7in stature.

The Barb Wire star wore her instantly identifiable blond locks with a middle part and cascading down her shoulders in thick waves.

She kept her look modest and only accessorized with a quilted black handbag.

Brandon, whom she shares with her ex-husband Tommy Lee, looked casual in a paint-splattered gray hoodie with loose-fitting light blue jeans and weathered gray sneakers.

He sported a goatee and had on a tan ski cap under his hood.

Late last month, Rolling Stone reported that the actress and her husband Dan Hayhurst were divorcing after just 13 months of marriage.

She filed to end her marriage in her native Canada, where she had spent much of her time at the height of the ongoing coronavirus pandemic.

DailyMail.com had reported exclusively in January 2021 that Anderson had tied the knot with Hayhurst, who had been her bodyguard.

Pamela, who was born in Canada and holds dual citizenship, had been living in Canada with her husband throughout her short-lived marriage.

She appears to be back home in Malibu now and more regularly spending time with her family after ending things with Hayhurst.

Pamela’s first marriage to rocker Tommy Lee has lately been in the news again after their turbulent union became the subject of the Hulu miniseries Pam & Tommy.

Lily James transformed herself into Pam for the role with veneers, blond wigs, prosthetic breasts and even a fake forehead.

Avengers star Sebastian Stan got covered in fake tattoos to nail Tommy’s appearance during the period.

The show focuses on the period in which the couple’s infamous sex tape was leaked to the world.

Seth Rogen, who co-executive produces the series, also stars as Rand Gauthier, a craftsman whom Tommy pulls a gun on and refuses to pay for work he did on the couple house.

Gauthier sneaks back later to steal a safe in the their garage as revenge, and he discovers it contains a recording of the couple’s lovemaking, which he and the pornographer Uncle Miltie (Nick Offerman) decide to sell.

Earlier in February, a source close to Pamela worried to People that the series had ‘re-traumatized’ the actress all over again.

‘After the tape was made public, it was a very traumatizing situation and it’s unfair that she is being re-subjected to this trauma, like re-opening a wound,’ they claimed.

‘She’s a human being and a mom. There’s a sense of hypocrisy about it. It’s her life and she should have the decision [as to] whether it’s turned into a commodity for public consumption.’

Pamela on a coffee run in Malibu
WELCOME to your #1 source for the world's most recognized blonde, Pamela Denise Anderson . PAO aims to bring you everything Pam, we have the web's largest Pamela Anderson Photo Gallery, the very latest news as it happens, the most active Pam forums, and so much more. Pamela Anderson Online is truly your number one source for the VIP Baywatch Beauty.