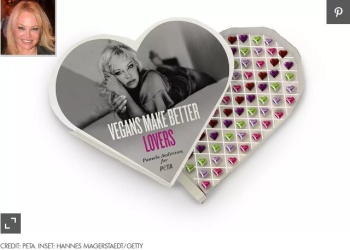 Anderson, 54, and PETA have partnered together on a new Valentine’s Day campaign for the animal welfare organization. The message they chose for the campaign: Vegans make better lovers.

To spread this statement, PETA secured a giant 3,400-square-foot billboard in New York City’s Times Square. As of Monday morning, the space now features a huge black and white photo of Anderson with the campaign’s “Vegans Make Better Lovers” message.

“I believe that having a big heart is the sexiest thing in the world,” Anderson said in a statement about the campaign obtained by PEOPLE.

Along with the billboard, PETA has also created a limited edition 25-inch-wide heart-shaped box of vegan chocolates featuring Anderson’s image on the front as a Valentine’s Day gift for animal lovers. The confection boxes, each containing 110 chocolates, will be available on PETA’s website for purchase, with the proceeds going to the nonprofit’s animal welfare work.

This Valentine’s Day campaign is the most recent partnership between Anderson and PETA. The Baywatch actress has worked with the nonprofit for decades, frequently supporting the organization’s efforts to promote veganism and end the use of fur in fashion.

Pamela Anderson will ‘never, never watch’ Pam & Tommy
WELCOME to your #1 source for the world's most recognized blonde, Pamela Denise Anderson . PAO aims to bring you everything Pam, we have the web's largest Pamela Anderson Photo Gallery, the very latest news as it happens, the most active Pam forums, and so much more. Pamela Anderson Online is truly your number one source for the VIP Baywatch Beauty.