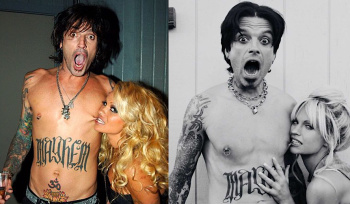 Hulu’s Pam & Tommy biopic is under intense criticism from fans, who are accusing the show’s creators of “profiting off” women’s trauma in the name of entertainment.

The miniseries, which premieres on Feb. 2, is set to retell the story of history’s first-ever viral video: Pamela Anderson and Tommy Lee’s infamous sex tape.

Lily James and Sebastian Stan will portray Pamela and Tommy as the show revisits the couple’s whirlwind romance, first documenting their wedding before the nonconsensual distribution of their sex tape, which was stolen from a locked safe in their home by an electrician who had been working on their property in 1995.

However, while the show entirely hinges on the exploitation of Pam and Tommy, it appears that neither were involved in the creation of the project.

Brand-new reports allege that Pam & Tommy was greenlit without Pamela’s approval and maintain that she “had no involvement whatsoever” in the show’s production.

Ahead of the biopic’s highly anticipated premiere, a source close to Pamela told Entertainment Tonight that she is finding the retelling of her trauma incredibly “painful.”

“The upcoming Pam & Tommy Hulu series has been very painful for Pamela Anderson and for anyone that loves her,” the source said. “It is shocking that this series is allowed to happen without her approval.”

The insider went on to say that Pamela still feels “violated” by the burglary that led to the tape being stolen and added that the rollout of the new show is uprooting a lot of painful memories.

“Pamela has no regrets about her life, but the only thing she would probably erase is this burglary,” the source said. “She feels so violated to this day. It brings back a very painful time for her.”

These reports came as a shock to lots of fans who had been looking forward to the show, many of whom took to social media to express their disappointment while others even threatened to boycott the project.

“This is so messed up. how do you make a tv show ‘about’ someone’s life who’s alive without their consent,” wrote one user.

“There’s something vile about creating a biopic about someone who is still alive AND said multiple times that they didn’t want the series made, like what happened to human decency,” agreed another, noting that this isn’t the first time that Pam’s disapproval has been made clear.

Back in May last year — shortly after the first photographs of Lily and Sebastian in character as Pam and Tommy hit the internet — Courtney Love, who is a close friend of the actor, accused the show’s creators and Lily of uprooting Pamela’s trauma against her will.

In a since-deleted Facebook post, Courtney called the show “so fucking outrageous” and wrote that its existence was causing Pamela “complex trauma.” “My heart goes out to Pammy,” she said, before going on to slam the show’s leading lady. “And shame on Lily James whoever the fuck she is.”

Discussing Pamela’s feelings now, many fans were quick to point out the stark irony in retelling the nonconsensual distribution of a sex tape without appearing to seek the prior consent of those at the center of the crime.

“The absolute weirdness in making a series about the non-consensual distribution of a sex tape without the subject’s consent,” someone said.
“They made a show without her consent based on a sex tape that was leaked without consent are they stupid or are they stupid,” agreed another.

Interestingly, some fans made a direct correlation between the distribution of the sex tape and the retelling of Pamela’s trauma, with one fan writing that the people are “profiting off” her exploitation in exactly the same way all these years later.

“This show coming out without her approval is the sex tape all over again. People are profiting off the exploitation of her once again,” they said.

“So, they’re doing the same thing that happened to her years ago and they want to acknowledge this problem by putting out there a TV show about her life without her permission just to profit off of her pain? WICKED,” said another.

What’s more, despite the creators’ intentions to cast the crime in a new light and “correct [the] record” on Pam and Tommy’s exploitation, many can’t help but feel that the mass rollout of the show will ultimately draw attention back to the stolen tape that the couple have tried so hard to escape.

Ultimately, people couldn’t help but feel that their trauma was being completely exploited in the name of entertainment and financial gain, which prompted one Twitter user to call out the wider industry for persistently “making victims relive their trauma for entertainment.”

“Enough of making victims relive their trauma for entertainment. Same with the serial killer movies. It’s all so weird and disrespectful. Will not be watching that mess,” they said of the show.

With this tweet in mind, it’s also important to mention that Pamela and Tommy’s marriage — despite being eclipsed by their stolen tape — was also abusive.
Pam and Tommy’s marriage came to an end in 1998 after she accused him of physically assaulting her while she was holding their infant son. Tommy served six months in jail after pleading no contest to the charges.

Despite serving time for spousal battery, Tommy has since appeared to dispute Pamela’s claims. In 2018, he slammed his ex-wife on Twitter after she discussed the abuse during an interview with Piers Morgan. Tommy called her “pathetic” for “rehashing old shit” and concluded the tweet by referring to himself as “the abuser” in quotation marks.

In light of the claims of abuse, the retelling of Pam and Tommy’s story felt all the more shocking to fans.

However, it’s important to note that, as is pointed out in the show’s trailer, Tommy’s experience of the sex tape scandal was different to that of Pamela, who was ultimately shamed and publicly villainized to a much greater extent than her ex-husband.

Addressing this during a recently published conversation with Variety, one of Pam & Tommy’s executive producers, D.V. DeVincentis, implied that the destruction of Pamela’s career and reputation would be explored in the show.

“With Pamela Anderson, what I always come back to is that [she and Lee] were doing the exact same thing. And filmed doing the exact same thing together,” he said of Pam and Tommy’s experiences. “One of them was slut-shamed and virtually drummed out of the business and turned into an unserious person. The other was given a new act and turned into this sex god. And the only difference between these two people [was] their gender. That’s it.”

In the same Variety article, the show’s creators were prompted to discuss what they thought the real Pam and Tommy would make of the retelling, to which they reiterated that Pam is the “hero” of the story.

“The show loves Pam,” producer Robert Siegel said. “So I hope Pam loves the show. She’s certainly the hero of the show. At every step of the way, we’ve tried to do right by her. From the writing to working very closely with Lily, who kind of grew into our custodian of the character.”
And despite reports that she “had no involvement” in the making of the show, its creators maintain that they reached out to Pamela but that she “chose not to engage.”

Siegel added: “So we’ve respected her desire not to be involved.”

Pam’s Sons Are All Grown Up—And Taking Over Hollywood
WELCOME to your #1 source for the world's most recognized blonde, Pamela Denise Anderson . PAO aims to bring you everything Pam, we have the web's largest Pamela Anderson Photo Gallery, the very latest news as it happens, the most active Pam forums, and so much more. Pamela Anderson Online is truly your number one source for the VIP Baywatch Beauty.