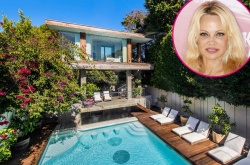 Moving out! Pamela Anderson sold her Malibu home for $11.8 million after owning the mansion for more than 20 years.

Us Weekly confirms that the 54-year-old Baywatch alum’s real estate agent, Tomer Fridman of Compass, made the sale on Tuesday, August 3. The California residence has four bedrooms and five bathrooms, with the entire house totaling 2,752 square feet.

Anderson bought the property in December 2000 for $1.8 million, meaning she made a $10 million profit. However, she did not get the listing price of $14.9 million.

Loren Kreiss, the CEO and creative director of luxury furniture company Kreiss, purchased the mansion. Sandro Dazzan of The Agency oversaw the deal as his agent.

The contemporary-style home was built in 1959 and features an open formal living room, a gourmet kitchen, a floating wood staircase, a private balcony, a retractable sunroof, a pool with a bar area, exclusive beach access and an attached garage. The guest house has a downstairs lounge, a fire pit and an ensuite bedroom with a fireplace and spa tub.

Anderson’s relocation comes seven months after she secretly married her bodyguard, Dan Hayhurst. The couple tied the knot on Christmas Eve in the backyard of her Vancouver Island home in Canada, where they met at the beginning of the coronavirus pandemic in 2020. They read traditional vows, while a local pastor officiated the ceremony.

The actress confirmed the marriage in January, sharing photos from the wedding with the Daily Mail. “I’m exactly where I need to be — in the arms of a man who truly loves me,” she gushed at the time.

Anderson raved that the pair are a “natural fit” and revealed that their families gave their blessings prior to the nuptials.

“I was married on the property I bought from my grandparents 25 years ago. This is where my parents were married and they are still together. I feel like I’ve come full circle,” she said. “I think this romantic property has a lot of healing energy. I’m at peace here. It’s a big property, but a few people passing by could see the fairy-tale gown with the long Princess Diana veil dragging in the mud. Heaven.”

The model made headlines in January 2020 for her brief marriage to Jon Peters, which was not legally binding. They split less than two weeks after holding a wedding ceremony.