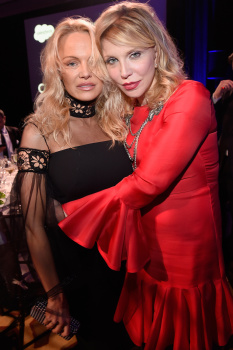 Courtney Love has some things to say about Hulu’s upcoming Pam & Tommy miniseries.

The four-time Grammy Award nominee, 56, defended her friend Pamela Anderson on Facebook Friday, posting a photo of an article about the limited series, which is set to cover the Baywatch star’s whirlwind romance with Tommy Lee and their infamous sex tape. “I find this so f—ing outrageous,” Love began in her post.

“When Pam / Tommy sex tape was out / myself @pattyschemel @xmadmx were making a record,” Love continued. “And the lone women in many recording studios in LA. Where all / ALL! The staff engineers / producers / owners / were watching the sex tape with huge schadenfraude.. Guffaws, It was disgusting. I banned anyone discussing it.. It destroyed my friend Pamelas life. Utterly.”

Anderson, 53, and Lee, 58, have yet to personally comment on the show.

A rep for Hulu did not immediately respond to PEOPLE’s request for comment.

Also in her post, Love claimed that the upcoming series asked to use her likeness. “Last week I was asked to approve using a Rolling Stone cover of mine / shot by Mark Seliger in this piece of s—,” Love wrote. “That they had approved. I said ‘f— no.’ shocked. Gentleman don’t approve this sort of thing.”

Love concluded her post by calling out Lily James, who will portray Anderson. “My heart goes out to Pammy ♥️♥️ further causing her complex trauma. And shame on Lily James whoever the f— she is. #vile,” Love wrote.

Reps for Anderson and James did not immediately respond to PEOPLE’s request for comment.

Pam & Tommy recently began filming with James and costar Sebastian Stan playing the titular couple. The series recounts their four-day romance leading up to their wedding on a Mexican beach in 1995, as well as the making and subsequent scandal of their sex tape.

The former couple sued the distributor of their sex tape, Internet Entertainment Group, before reaching a confidential settlement. The tape was still released publicly.

“I’ve never seen it. I made not one dollar. It was stolen property. We made a deal to stop all the shenanigans,” Anderson said on Watch What Happens Live in 2015.

Chuck Zito calls HULU series a Bad Idea
WELCOME to your #1 source for the world's most recognized blonde, Pamela Denise Anderson . PAO aims to bring you everything Pam, we have the web's largest Pamela Anderson Photo Gallery, the very latest news as it happens, the most active Pam forums, and so much more. Pamela Anderson Online is truly your number one source for the VIP Baywatch Beauty.