Pam reveals what happened to her Baywatch Bathing Suit 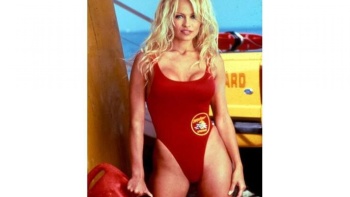 When “Baywatch” fans think of the popular TV series from the ’90s, chances are flashbacks of Pamela Anderson strutting on the beach in her iconic high-cut red swimsuit immediately come to mind.

Her role as C.J. Parker contributed to Anderson becoming a household name, and in an exclusive interview with Fox News, the 52-year-old actress and model revealed she not only still owns the memorable number, but in fact, still fits in it, too.

“Oh, I have one right here in my top drawer! It still fits,” Anderson said.

“I have worn it on occasion just to be funny with my friends,” she continued, adding that she’s been known to hop out of her pool or shower with the skin-tight number on “to try to give them mouth to mouth!”

“Mostly,” though, Anderson said, she can be spotted at home in the one-piece “just around the living room.”

Anderson appeared on the popular TV series for a total of five seasons from 1992-1997. She later appeared in the 2003 film spinoff titled “Baywatch: Hawaiian Wedding.”

While she is known as an international sex symbol, Anderson said she can relate to her fans who often question her for advice about sex positivity and confidence. She says her key to allowing herself to be vulnerable in a sexy outfit or posing for a glamorous picture is as simple as just “being you.”

“I was painfully, painfully shy but you probably won’t believe it,” Anderson shared. “But I got over it. I really hated that feeling. I realized that nobody cares as much about what you’re wearing or what you look like other than you. Nobody cares as much as you do. You’re your own worst critic. You always feel good if you just do it, just do something you really want to do. Afterward, you’re so glad you did that. I always say paint your own picture and what you want your life to look like and who you want to be because society tells us we have to be a certain way and we really don’t have to be. There’s really no rules.”

Anderson has plenty more advice to share. With impressive modeling and acting careers already under her belt, Anderson dished to Fox News about her new role as the Creative Director at Jasmin, a new webcamming site whose slogan is “Real people. Real connections.” The website allows Anderson to connect with strangers around the world who are seeking advice about romance, sex positivity and relationships. From her home on Vancouver Island, Anderson said the role is allowing her to flex some of her creative muscles in a way she hasn’t before.

“50 million people a day go to this site so I thought it was a great opportunity to talk about anything people feel passionate about from activism, to health and beauty and romance and dating and just anything you can think of,” Anderson said of the new platform. “They’re definitely pioneers and paving new ground and we’ll see where it goes. It’s fun.”

She’s kicking off her new role by working at home in quarantine like so many others during the coronavirus pandemic. While she’s not afraid to have her own fashion show for fun, Anderson shared what she often wears most of the time when she’s at home alone.

“My whole wardrobe is basically silks, slips and sweaters,” she said. “So I’m in pajamas all the time!”

Pamela: I Never Married, Had ‘Physical’ Relationship with Jon Peters
WELCOME to your #1 source for the world's most recognized blonde, Pamela Denise Anderson . PAO aims to bring you everything Pam, we have the web's largest Pamela Anderson Photo Gallery, the very latest news as it happens, the most active Pam forums, and so much more. Pamela Anderson Online is truly your number one source for the VIP Baywatch Beauty.