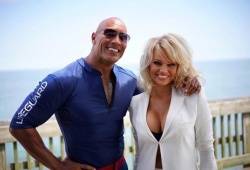 Although Anderson, who played C.J. Parker in the original iconic television series, made a small cameo in the 2017 film adaptation, that doesn’t mean she’s a fan of the way it turned out. During a recent episode of Watch What Happens Live with Andy Cohen, the 52-year-old actress was asked to share her honest thoughts about the movie — and she didn’t hold back.

“Let’s just keep the bad TV as bad TV. That’s what’s charming about Baywatch, you know? Trying to make these movies out of television, is just messing with it,” she added.

Continuing to praise the genre, Anderson added that while many films require a sizable budget, it’s easier to make do with less for television — without making a big sacrifice in quality.

“$65 million would make a good movie. We made our show for like $500,000,” she said. “You have the same explosions, the same sequences of water, that’s the fun part. Being creative.”

Of course, Anderson isn’t the only one who’s given the 2017 remake a less than flattering review.

Shortly after the film was released, star Dwayne “The Rock” Johnson poked fun at its low Rotten Tomatoes score, which at the time had been bumped up 18 percent. (It currently stands just one tick lower, at 17 percent.)

Although Anderson may not have been the biggest fan of the film, she still has a soft spot in her heart for her iconic swimsuit — which she still wears for special occasions.

In an interview with The New York Times last year, the actress revealed that sometimes she slips on the red one-piece to surprise dates.

“I jump in the shower with a bathing suit and then jump on them wherever they are in the house, soaking wet,” she said.

Pam promotes new webcam service in sexy lingerie
WELCOME to your #1 source for the world's most recognized blonde, Pamela Denise Anderson . PAO aims to bring you everything Pam, we have the web's largest Pamela Anderson Photo Gallery, the very latest news as it happens, the most active Pam forums, and so much more. Pamela Anderson Online is truly your number one source for the VIP Baywatch Beauty.