Pamela reveals the secret behind her incredible physique

Pamela Anderson has revealed the very surprising secret to maintaining her enviable physique.

Speaking to Australia’s Maxim magazine, the 52-year-old said that the simple trick to maintaining her sex appeal is keeping her curves.

‘I try to keep on a bit of weight – I think it’s better on me,’ the Baywatch beauty explained.

Pam also said that she doesn’t try to act sexy in front of the camera, and that the trick to her confidence is just being herself.

‘I don’t approach anything differently,’ she explained to the publication.

‘I just act the way I would without the camera there – I’d be the same around my friends,’ she continued.

‘I just kept the focus on feeling good and I enjoyed the sun. Being outdoors makes me happy and healthy — it’s sexy.’
END_OF_DOCUMENT_TOKEN_TO_BE_REPLACED 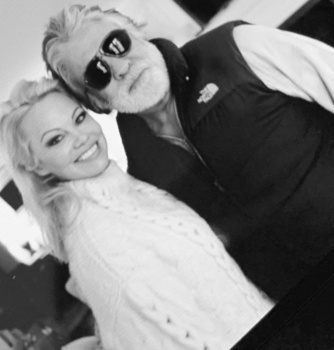 Pamela Anderson is happy in love with her new husband — and wants to show him off to the world!

The actress and activist, 52, who secretly married movie mogul Jon Peters, 74, on Monday, posted their first photo together as married couple to her Instagram Stories on Friday. Anderson is beaming in the black and white shot, smiling next to her husband who’s seen wearing shades.

“They are very much in love and were married yesterday,” Anderson’s publicist told PEOPLE on Tuesday of the couple.

Their wedding comes 30 years after the couple first dated and a few months after they rekindled their relationship, keeping the romance out of the spotlight. The Hollywood Reporter was first to report the news.

“Pamela has never seen her full potential as an artist. She has yet to shine in a real way. There is much more to her than meets the eye, or I wouldn’t love her so much,” Peters told THR after the nuptials. “There are beautiful girls everywhere. I could have my pick, but — for 35 years — I’ve only wanted Pamela.”

Anderson shared a poem with THR, in which she professed her love for her fifth husband:

“Jon is the original ‘bad boy’ of Hollywood – no one compares –
I love him deeply like family.
His life used to scare me.
So much for a girl like me. Now I’ve seen more of life and realize ..
He’s been there all along. Never failed me –
I’m ready now and
he’s ready too – We
understand
and respect each other – We love each other without conditions. –
I’m a lucky woman. – Proof
God has a plan”

Anderson was previously married to Tommy Lee, with whom she shares sons Brandon, 23, and Dylan, 22. The two were married from 1995 to 1998 and had a tumultuous marriage, in which Lee spent 6 months in the Los Angeles County Jail for spousal abuse.

The Baywatch actress was most recently linked to French soccer star Adil Rami.

She also had a close relationship with WikiLeaks founder Julian Assange for several years, often visiting him at the Ecuadorian embassy in London where he was previously confined after seeking asylum. She’s often called for his released and the end of his persecution for sexual assault claims.

He also had a 12-year romance with Streisand when he met her as a hair dresser before A Star Is Born, according to THR.

Peters and Anderson first met at the Playboy mansion in the mid-’80s and began dating after their encounter.

“I walked in and saw this little angel sitting at the bar. It was Pammy. She was like 19. I knew she would be a big star,” he told THR in 2017. “We ended up living together. Of course, [Hugh] Hefner loved her and saw her beauty. Pamela was a girl who with no makeup was gorgeous. She was very smart and very talented. I tried to talk her out of doing Playboy. I said, ‘Don’t do Playboy. Focus on a serious career.’ She said, ‘You’re nuts.’ She wanted to do Playboy, and she went on to do 13 covers.”

The movie producer told THR he proposed to Anderson after helping get her career started, including paying for her acting classes and dance and voice lessons. Though the actress turned him down, Peters recalled telling her that their age difference wouldn’t matter “in 30 years.”

Pamela Anderson secretly married Hollywood producer Jon Peters yesterday along with her ex-husband Tommy Lee has nothing but well wishes for her.

Pamela Anderson, 52, tied the knot with Hollywood producer Jon Peters, 74, at a private ceremony in Malibu on Monday, January 20. The group, who have allegedly been dating since late last year, never went public with all the connection so that the union information took the world by surprise. However, Pamela does have a background of surprise weddings. In 1995 she wed Motley Crue drummer Tommy Lee, 57, only 4 days after their first season.

The group had an incredibly tumultuous marriage which lasted for three decades — only long enough to allow them to have 2 sons, Brandon Thomas Lee, 23, also Dylan Jagger Lee, 21. In the years because Pamela and Tommy have not always gotten along, but a source tells HollywoodLife EXCLUSIVELY the rocker really anticipates his ex-wife has discovered happiness.

“Nothing will ever be the exact same for Tommy as it comes to his relationship with Pam,” the source tells HL,”it was a once in a life relationship, together with once in a lifetime adventures, but a long time has passed what Tommy expects for Pam, the mother of his kids, today is that she’s in a happy place with her husband as she was not then there could be hell to pay.

“Tommy is joyful for Pam even when they have their differences from time to time. Tommy has been in a position to proceed with his love life therefore he believes that Pam must have the exact same chance and he expects that she’s happy and has exactly the life she desires.”

Last year Tommy wed Brittany Furlan, 32, following two-years of relationship and appears to have found his game. Obviously fans of Pamela will understand she really has more than 1 surprise marriage in her very vibrant history. Actually it is sort of an issue for her.

In 2007 she wed Rick Salomon, 51 who might be best known for starring in Paris Hilton‘s 2003 sex tape, at a spontaneous vegas wedding. The marriage was annulled following a couple of months. However, in 2014 they gave it a second try and remarried in still another surprise marriage, just to divorce the subsequent calendar year. Pamela was briefly married to Kid Rock. They wed in July 2006 on a yacht in St. Tropez. It was not a surprise but it also did not survive and Pamela filed for divorce in November of that exact same year.