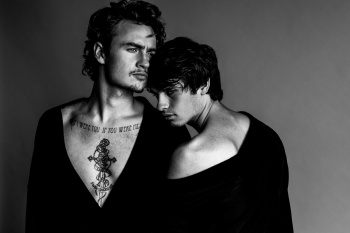 BRANDON: Yes, and it’s so funny. Everyone thinks that she and Julian are dating or whatever. The world’s so crazy like that. She’s definitely got this savior complex—she’s a protector of the beaten down and the underdogs. If you are facing adversity, my mom is going to stand up for you no matter what.

BETTRIDGE: You guys live together. Who is the messy one?

DYLAN: I’m the clean one.

BRANDON: Dylan is always hassling me about not doing the dishes. He’s fucking crazy.

BRANDON: Dude, it’s where the biggest TV is.

BETTRIDGE: Do you guys cook?

BETTRIDGE: What did you guys think of [the Mötley Crüe biopic] The Dirt?

DYLAN: I thought it was cool. I asked my dad about it, and he was like, “It’s pretty spot on.” I definitely saw some shit where I was like, “Jesus, Dad. Was it really like that?” And he was like, “Things were different back then.”

Mariah Carey Celebrates Tour’s End with Pamela Anderson
WELCOME to your #1 source for the world's most recognized blonde, Pamela Denise Anderson . PAO aims to bring you everything Pam, we have the web's largest Pamela Anderson Photo Gallery, the very latest news as it happens, the most active Pam forums, and so much more. Pamela Anderson Online is truly your number one source for the VIP Baywatch Beauty.