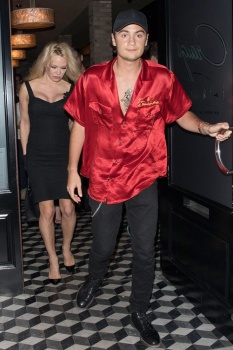 Brandon Lee was seen stepping out to dinner in Los Angeles with mother Pamela Anderson on Monday night, weeks after the 21-year-old had a physical altercation with his father, Mötley Crüe rocker Tommy Lee.

The fight erupted after Tommy shared disparaging posts about Anderson, his ex wife, on social media. But despite the feud — which resulted in a hospital trip for the 55-year-old drummer — Brandon insists that he still has affection for his father. “I love my dad,” he told reporters for TMZ as he exited Craig’s, a West Hollywood eatery.

The altercation occurred on March 5 at Tommy’s home in Calabasas, California. The following day he posted (and quickly deleted) a selfie of his swollen lips on Instagram captioned, “My heart is broken. You can give your kids everything they could ever want in their entire lives and they can still turn against you. Good job Brandon. Great son!”

Sgt. Matthew Dunn confirmed to PEOPLE that the L.A. County Sheriff’s Department will hand over the battery case to the district attorney after completing their investigation.

Representatives for the Los Angeles County Sheriff’s office, who arrived on the scene soon after the incident, previously told PEOPLE the pair had been arguing about a series of tweets and photos Lee had posted responding to a recent interview given by Anderson. During an appearance on Piers Morgan’s Life Stories that aired on ITV, the former Baywatch star, 50, discussed physical abuse she claimed to have endured from Tommy during their relationship.

Both Brandon and Pamela have blamed the incident on Tommy’s alcoholism and substance abuse. In an exclusive statement to PEOPLE, Brandon claimed that he planned to stage an intervention for his father.

“I’m devastated at the events of the last several days that have been a result of my father’s alcoholism,” he said at the time. “I’ve worked tirelessly organizing an intervention and it’s incredibly upsetting that it never came to fruition. I wanted my dad’s hopeful sobriety and recovery to be a private family matter but, as a result of his accusations on social media, I feel forced to speak out. I have and will continue to cooperate with law enforcement as needed. I love my father and just want to see him sober, happy and healthy.”

Anderson shared the sentiment. In a lengthy statement titled “Alcoholism is the Devil” shared on her website, Anderson called her ex “a disaster spinning out of control” but said that his destructive behavior “is nothing new.”

Lee shared a statement of his own with the outlet, denying the accusations wholeheartedly. “Do I drink more than the average Joe? Yes. Have I ever hurt my sons or acted out of turn with them because of my drinking? No,” he writes. “No matter how much people wanna pin me as this deviant alcoholic abuser, that isn’t me. I’m a happy fun-loving guy.”

Anderson, meanwhile, insists his drinking is a serious problem. “I pray Tommy gets the help he needs. His actions are desperate and humiliating — he is a disaster spinning out of control. And he is not acting like a father.” She also added that her sons “have made every attempt to help him in recent months,” adding that her Brandon was “putting together an intervention” because he wanted to see his father turn his life around.”

Pamela Anderson: Becoming a ‘Playboy’ Model ‘Saved My Life’
WELCOME to your #1 source for the world's most recognized blonde, Pamela Denise Anderson . PAO aims to bring you everything Pam, we have the web's largest Pamela Anderson Photo Gallery, the very latest news as it happens, the most active Pam forums, and so much more. Pamela Anderson Online is truly your number one source for the VIP Baywatch Beauty.