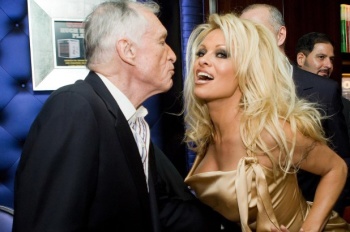 Anderson, 50, hinted that she was initially terrified during a 1980s visit to the Playboy Mansion, though she insisted that the late Hugh Hefner was a complete gentleman.

“Everyone was naked in the grotto and the girls were ­downstairs and they all went upstairs,” Anderson recalled in a preview obtained by The Sun. “I followed them upstairs. I thought, ‘What could be going on up here?’ Seven girls, one at a time with Hef. I stood at the end of the bed watching them and then I realized they were watching me. I thought, ‘This is not a movie. I need to leave.’ ”

“I have seen a lot of ­craziness at the Playboy Mansion,” she added. “He had a lot of women around. There were these big TV screens with crazy things going on with him and the girls and baby oil.”

Of Hefner, who passed away in September 2017 at 91, Anderson gushed, “He was a pioneer. A true gentleman and he was charming. He loved women and he empowered women. He was very forward-thinking and created his own life. Nobody could copy him. It was nothing salacious. I thought it was very innocent.”

Anderson also revealed that he acted as a protector when she encountered sexual harassment in Hollywood.

“I have had men say, ‘Come back to my hotel room and audition with me. If you don’t come I will give it to the girl across the hall,’ ” she said. “And then they have ended up giving the role to a girl across the hall. People have said, ‘Pamela, come and join us in the Jacuzzi and I will give you $100,000.’ And I have said, ‘I think that is more than just the Jacuzzi. I am calling Hef.’ ”

Of disgraced mogul Harvey Weinstein in particular, Anderson claimed that he was never sexually inappropriate with her, but that he was a “bully,” alleging, “Over the phone he was threatening. And I didn’t work again because I stood up to him.”

A rep for Weinstein told Page Six of Anderson’s claim, “Mr. Weinstein never spoke to Pamela Anderson on the phone regarding this film. This was a Dimension project and she dealt with Bob. Mr. Weinstein always recalls Ms. Anderson having a great relationship with the Company and they all thought her contributions to the film and the television world were fabulous. She brings up some great points in her interview and as an industry vet her remarks are valuable. However, Mr. Weinstein stands firm on his recollection of his interactions with her.”

The blond bombshell also revealed the nature of her relationship with Russian President Putin.

“I wrote to him and asked him to stop the importation of seal products, because this was 95 percent of the market and that could potentially shut down the Canadian seal hunt, which is one of my big goals, and he did. He made it actually illegal to import seal products into the country,” she said.

When pressed on whether she was romantically involved with Putin at any point, Anderson giggled and played coy.

“He wanted me to come to his inauguration and give him flowers … I didn’t do that,” she said, conceding, “Obviously we have been in the same place together sometimes … I had a great relationship with Russia, yes.”

The “Baywatch” babe also admitted turning down “Rocky” and “Rambo” star Stallone, despite his best efforts.

“He offered me a condo and a Porsche to be his ‘number one girl,’ ” Anderson revealed. “I said, ‘Does that mean there is a ­number two?’ He said, ‘Of course.’” She added, “He is very funny. I did not take the condo or the Porsche. Maybe I should have.”

A rep for Stallone, 71 — who’s been happily married to former swimsuit model Jennifer Flavin for two decades — did not immediately return a request for comment. Pamela Anderson has revealed some bedroom secrets about her relationship with Marseille defender Adil Rami.

The former Baywatch star, 50, moved to France earlier this year as the couple took their relationship to the next level.

She was pictured watching Rami, 32, in action for Marseille last month, although she has been tight-lipped about their relationship.

But now she has provided some saucy information on their sex life – with Rami enjoying her dressing up as a sexy maid.

“He is fantastic. I love him, of course. You have to be very brave and enjoy things,” she told The Sun.

“The outfit comes out once a boyfriend. I probably shouldn’t be talking about it. I am so bad. I have no filter.”

Anderson, who has revealed Rami is helping her through the menopause , is not ruling out the defender becoming her next husband.

“I want to get married again in my lifetime. But I don’t like the phrase ‘toyboy’.

“I care about him a lot and we get along. Who knows how long this world is going to last with the way it is going. You might as well enjoy your life.”

Since breaking through the youth ranks at lowly Frejus, French international Rami has worked his way to the top of leagues.

He really made his name at Lille, before moving to Valencia and then on to AC Milan.

The defender now plays for Marseille and has 33 French caps, including one goal.