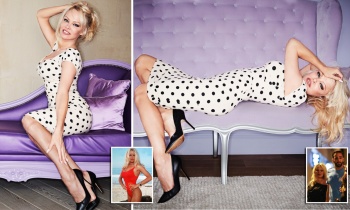 Down in the South of France it feels like summer, even in February. Warm sunshine dapples the ochre walls, the Mediterranean is a-sparkle and love, crazy love, is in the air.

For here in Marseille, Pamela Anderson has found herself in the grip of un grand amour; she and a French footballer called Adil Rami are madly in love, oblivious to the language barrier and the 18-year age gap that might have kept less reckless lovers apart.

Yes, it’s complicated, but Pamela and Adil met last summer and have been inseparable ever since. ‘Oh, I don’t want to talk about him,’ she cries. ‘We want to protect our love. There are a lot of fake and phoney relationships out there, people just trying to get noticed.

‘He does not want this and neither do I. He is not with me because he wants attention and vice versa.’

Yet somehow she cannot stop herself. It’s just too intoxicating. ‘He cares about me deeply,’ she tells me. ‘We have a very healthy, simple wonderful life without all the bells and whistles. We both have our children to try to squeeze into the equation, but he is amazing. He is a good guy, really a good guy.’

The couple have lived together for the past six months in Marseille, where he plays for the local team. Life is good, despite the fact the sea views remind her daily of the plight of the refugees trying to reach Europe from Africa. ‘Every time I put even one foot in the Mediterranean, I think of them,’ she says.

She attends Adil’s home games, sitting high up in the grandstand where the bright plumage of her plunge cocktail dresses and tousled blonde hair make her look like an exotic bird nesting in an eyrie of navy padded jackets.

After eight months together, the couple have their routines. He trains relentlessly in the outdoor gym installed at their new home, while she likes to shop in the markets for Provencal vegetables to cook vast suppers for her hunky beau.

She never lets her glamour standards slip, though, even in the kitchen, and hasn’t worn flat shoes or jeans since leaving the U.S.

‘I don’t do sweatpants,’ she says, preferring a Pammy-tastic domestic uniform of ‘little vintage slips, sexy things.’ Sometimes Adil looks at her like he can’t believe it. ‘He calls me an alien,’ she says.