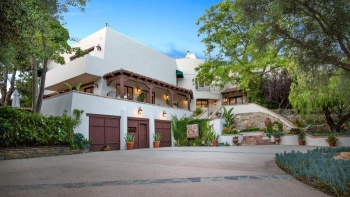 A Spanish villa-style home built for Motley Crue drummer Tommy Lee and actress Pamela Anderson and later owned by Boys Don’t Cry frontman Nick Richards is back on the market in Malibu for $3.475 million.

The home’s latest appearance on the Multiple Listing Service is far from its first. The estate has been shopped on and off since Richards sold the property in 2015 for $2.2 million.

The 1991-built home was described in listing details as in need of renovations when Richards sold it, but has since been restored anew with 7,462 square feet of bright living spaces and modern comforts.

Beyond the front door is a two-story rotunda entry with Spanish tile floors under a wood-beamed ceiling. A dual-sided fireplace anchors the space, while an ornate wrought-iron staircase rises adjacent. Living spaces include a step-down billiards room with a wet bar, a wine cellar and a family room.

The master suite is complete with a dual-sided fireplace and spa-like bathroom for a total of six bedrooms and six bathrooms.

Outside, the 2.3-acre property centers on a lagoon-style swimming pool and spa with waterfalls. Lush landscaping surrounds multiple stone patios, a koi pond and a grill to complete the grounds.