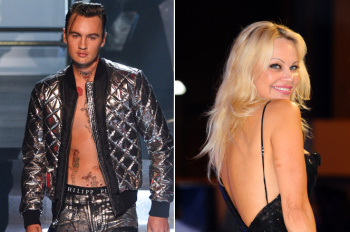 The 21-year-old model and actor, whose tattooed torso turned heads at Philipp Plein’s Saturday night show, says he has full veto power over his mom’s outfits.

“Sometimes she’ll have a stylist come over to the house . . . and right after they leave I’m like, ‘You’re not wearing any of that!’ ” Lee tells the Post. “I don’t care about the revealing stuff. I’m just like, ‘You’ve gotta change it.’ She listens to me.”

Lee, who’s appearing in the upcoming short film “Inherent Greed” and next year’s high school comedy “Sierra Burgess Is A Loser,” says his mother’s style has evolved through the years. “Now she’s more elegant and chic than when she was an ’80s bombshell. She’s more involved with her charity now and it’s a lot more classy stuff,” he says.

But he doesn’t bother doling out advice to his dad, rocker Tommy Lee. “He doesn’t listen to anybody, he just does his own thing.”

Pamela for annual BGC Charity Day in New York City
WELCOME to your #1 source for the world's most recognized blonde, Pamela Denise Anderson . PAO aims to bring you everything Pam, we have the web's largest Pamela Anderson Photo Gallery, the very latest news as it happens, the most active Pam forums, and so much more. Pamela Anderson Online is truly your number one source for the VIP Baywatch Beauty.