‘I’m a work in progress’: Pamela Anderson on restoring her B.C. home and herself 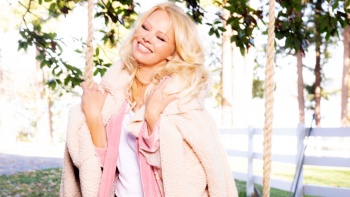 Model, actress and environmental crusader Pamela Anderson is on a mission of rehabilitation.

Reached at her home in Ladysmith, B.C., she says the goal at hand is to overhaul the six-acre Vancouver Island property where she spent her earliest years and now hopes to establish as a multi-generational haven for herself, her parents and her sons. It’s the focus of her new HGTV Canada reality show, “Pamela’s Garden of Eden,” which premiered Thursday.

At the same time, the Hollywood star says she’s been hit with a burst of introspection: while on the property she wrote a memoir due for release at the end of January and she is preparing to release a Netflix documentary about her life.

“Coming back here was really triggering. For me, it’s very emotional,” Anderson says of revisiting roots to a childhood she’s described as difficult.

“When I came home, I think I was not as happy as I normally am. I came home to really face some things. There’s certain things in your life that you just kind of push aside and it was just so healing for me to come home and it took me a while to kind of grasp what I was putting myself through.”

Further details about her early life and colourful celebrity career will be revealed in the upcoming memoir and streaming project, she assures, acknowledging that the recent reset to small-town life is worlds away from the tabloid-grabbing exploits of her ’90s heyday.

“I’d never been on a plane before when I left this island. You know, I left the island and I went to Vancouver and then I moved to L.A. and then I went around the world and south of France for a year before I moved home,” says Anderson, who first rocketed to fame as a Playboy pin-up and “Baywatch” TV star.

“I was restless when I was here. And I had to learn how to be comfortable, just relaxing and enjoying and putting all my creative juices into this project, making this an art project, listening to other people’s ideas.”

Anderson says she bought the property about 30 years ago from her grandmother, believing she “just needed some Canadian roots” and that she would move there one day. It would take longer than expected, she suggests in a first episode that briefly alludes to years of an “overwhelmed” life in Los Angeles, a busy career and multiple high-profile marriages.

She says it was “gut-wrenching” at first to return to the sprawling waterfront property, which includes three buildings known as the roadhouse, the boathouse and the cabin.

“I felt like this place was like a broken heart, which I really had to kind of turn around.”

These days, Anderson says she relishes the new creative chores that occupy her time – painting, repainting, pottery and vegetable canning among them – while discovering her personal design style.
END_OF_DOCUMENT_TOKEN_TO_BE_REPLACED

Pamela Anderson says upcoming memoir is ‘a celebration of imperfections’ Pamela Anderson has revealed the cover of her upcoming memoir, “LOVE, PAMELA.”

The actress, model and activist shared the cover of her upcoming release from Dey Street Books on Wednesday.

“It feels like some kind of miracle — to be retracing the painful steps of my youth,” she wrote of the memoir in her announcement. “I repainted scenes in detail if it were my childhood or at the playboy mansion. Just one girls messy life. A celebration — of imperfections. The book is a unpolished attempt. I had no co writer.”

“My life — as a mother, as an activist, and as an actress,” her caption continued. “I am so proud of this book.”

Anderson’s sons took to the comments to share their support.

“I am so proud of you! What a huge year this is gonna be! You deserve it!! ❤️❤️❤️” her older son, Brandon Thomas, commented, while her younger son, Dylan Jagger Lee, added, “LOVE YOU!!! ❤️”
MORE: Who was ‘Sporty Spice’ before the Spice Girls? Mel C goes way back in her new memoir

Anderson also revealed in March that a Netflix series is being made about her life. The Ryan White-directed project has reportedly been in the works for years and will contain “exclusive access to Pamela Anderson as well as never before seen archive footage and personal journals.”

The actress is starring in her own HGTV show where she renovates her grandma’s legacy property on Vancouver Island.

“Pamela’s Garden of Eden” will follow the actress as she tackles different aspects of the six-acre waterfront property to modernize, with a focus on the three main areas: The Roadhouse, The Boathouse and The Cabin.

Anderson won’t be alone in the endeavour as she’s assembled a crack team consisting of contractors, an architect, a designer, and input from her parents and son.

The first episode, titled “I Love Laundry!”, will see the team take on the unfinished Roadhouse basement which they hope to transform into a laundry area, pantry and mudroom.

The 55-year-old has recently returned to the spotlight after being the focus of two media projects in the last few years.

Hulu’s “Pam & Tommy” series focused on a fictionalized version of her romance with Tommy Lee which was created without any insight from her, while Netflix announced a new documentary that will feature Anderson’s personal account of her life with never before seen footage.

“Pamela’s Garden of Eden” is set to premiere Nov. 10 on HGTV Canada.

Page 1 of 106 1 2 3 4 … 106 Next »
WELCOME to your #1 source for the world's most recognized blonde, Pamela Denise Anderson . PAO aims to bring you everything Pam, we have the web's largest Pamela Anderson Photo Gallery, the very latest news as it happens, the most active Pam forums, and so much more. Pamela Anderson Online is truly your number one source for the VIP Baywatch Beauty.